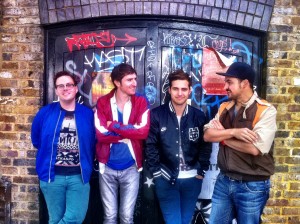 “F*** it, let’s open a music venue on a boat” – “What are you talking about? That’s ridiculous” – “Trust me, it’ll be great, rather novel in fact.” The passage above demonstrates how I’d like to think the opening of Bristol’s Thekla came about. I’m as sure that the plans were more well thought out and complex as I am that it’s a blinding venue for live music. I’ve never seen a bad gig there and Walk The Moon’s Bristol date of their UK tour was no different. The Cincinnati based indie with a hint of pop rockers brought their funky riffs, catchy choruses and bundles of energy on board to dazzle the audience with their arsenal of feel good tracks. Starting proceedings with the opener from their eponymous debut album, a fine performance of “Quesadilla” set the bar high and at no point was it lowered. I’m well aware that in this month’s Heaven’s Basement review I said that Aaron Buchanan’s vocals were flawless and I don’t want it to seem like I’m being repetitive but the same compliment has to be levelled at Nicholas Petricca of Walk The Moon; for one moment I genuinely thought, “they’re playing the album, right?” – they weren’t. It was a case of a wonderfully talented frontman on top form. I like my music loud with the sound of a guitar blaring out at full volume although sometimes when watching live music it frustrates me that this can overpower the vocal performance. Not on this occasion. Throughout the night he’d also man the keys, bass drum and synthesiser with apparent ease. The hull was packed out and its honourary crewmembers were in good spirits. “Quesadilla” slyly morphed into “Next In Line” as the first of many sing-alongs commenced. The brilliant “Shiver Shiver” followed but not before Petricca took a moment to address a crowd that he would later give pep talks and meditation techniques. Wanting the crowd to “let go” as he did on stage, they obeyed and after being encouraged to let the bad thoughts out through their fingertips it actually did feel like the gig hit another level as one upbeat song with an infectiously catchy chorus and delightful frantic to slow to explosive pace was followed by another. “Tete A Tete”, a newbie from their upcoming ‘Tightrope’ EP, preceded the wonderful “I Can Lift A Car”, which had the crowd chanting “Over my head, over my head, I can lift a car up over my head” along with the band. In amongst the joy-fest the fantastically exuberant “Tightrope” pounded through the boat with “Fixin’” and “Lisa Baby” also sending the audience into mass hysteria in the form of uncontrollable bouncing. And then there was “Iscariot”. Wow. A rare slow number provided a break from the tenacity of the uplifting that had taken place and it was stunning. To the observer my reaching for the phone and texting may have looked like an insult to the band but I had to let people know what this moment had done to me. Upon hearing this live I felt the way I did when hearing The Killers perform “All These Things That I’ve Done” at Glastonbury in 2005. I was floored. It was delicate, vulnerable, harmonic, powerful, dark and inspiring. Petricca’s performance of the song was beautiful. 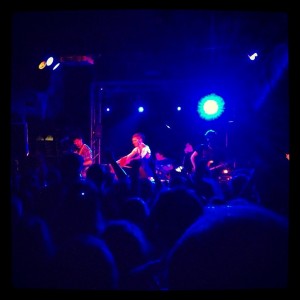 Shortly after the gig the band uploaded this photo to Instagram with the message: “Bristol! We had so much fun partying with you last night. Thanks for the love!”

Acknowledging that their set was to come to an end, Nicholas Petricca introduced the rest of his band, who were incredibly tight throughout the set. He pleaded for fans to meet with him, Kevin Ray (Bass/Vocals), Sean Waugaman (Drums/Vocals) and Eli Maiman (Guitar/Vocals) after the gig before the funky bass line to the cool “Jenny” kicked in. The crowd erupted and then hit another level altogether when the band’s most well known hit to date, “Anna Sun”, rounded off a spectacular and entertaining performance. Receiving almost tribal-like sing-alongs throughout that symbolised the successful establishment of cult status, I was left thinking that this band are going to be huge when more people hear their catalogue of instantly accessible delights. Photo above from Instagram: Shortly after the gig the band uploaded this photo to Instagram with the message: “Bristol! We had so much fun partying with you last night. Thanks for the love!” For more information about the band go to www.walkthemoonband.com and look out for their new ‘Tightrope EP’ released on March 10th. Support Act: The Rubens Made up of Scott Baldwin and brothers Zaac, Elliot and Sam Margin, Australian alternative rock band The Rubens’ performance at Thekla demonstrated just why they’ve risen so quickly since their formation in 2011. Their debut self-titled album was a big success in their homeland and the band impressed in Bristol with tracks from that. With a blues/soul element to their rock, John Mayer was the first comparison that sprung to mind with lead vocalist Sam’s voice equally as warm and filled with emotion. A mixture of laid back and heavier numbers were as smooth as each other with the standout track being “My Gun”. I may be way off the money but I drew comparisons to The Beatles, The Stands and The Black Keys and easily convinced myself that I wanted to hear more. Find out more about The Rubens at www.therubensmusic.com
Follow @Thefixmag
Recent Posts
We Like You…