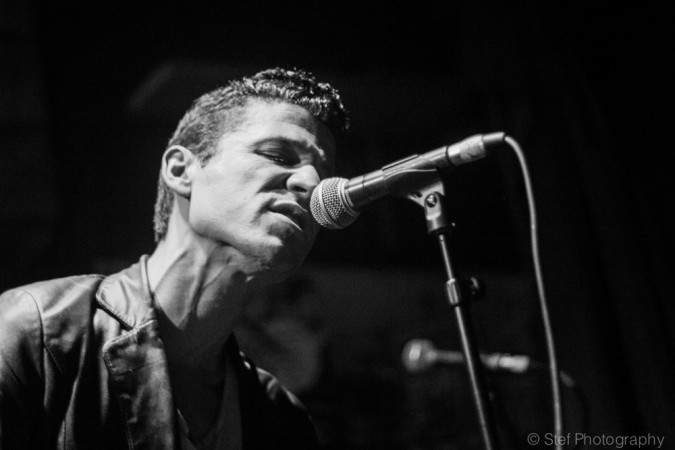 After an impressive slot supporting Dum Dum Girls at the very same venue in May of last year (a line up with a whiff of nepotism considering Crocodiles frontman Brandon Welchez’s marriage to Dee Dee Penny), the lo-fi, psychedelic rock duo from California returned to Start The Bus as headliners for tonight’s free show. Appearing this time as a four piece, two guitars, bass and drums combine to effectively, and energetically, recreate the fuzzy, reverb-soaked ferment of their records.

“What’s up Bristol? It’s good to be back”, Welchez declares as Crocodiles’ set begins in a typical squall of fuzzed out, high energy rock with lead guitarist Charles Rowell swaying in unison with his sextet of uncut, dangling guitar strings. The heavy bassline of ‘Fooling Around’ sounds a little reminiscent of ‘Billie Jean’ before thrashed bar chords, popping effect pads and a shrieking guitar solo return us to more familiar terrain.

Though Crocodiles’ occasionally infectious melodies can sometimes get lost within the echo-laden din of live performance, the twisted love song of ‘Marquis De Sade’ provides a joyful moment of call-and-response chorus melody; such sadism, as in the song’s sentiments of “When I’m in need down at your feet/Raise up your fist, smash in my teeth”, has never sounded so euphoric.

One of the pleasurable aspects of watching Crocodiles live is Rowell’s guitar playing mannerisms; though forever flirting with superfluous posturing, his animated axe work never falls short of stylish as he attacks his instrument through one distorted racket to the next. The uncompromising stomp of ‘Billy Speed’ sees him manoeuvring with swaying leg kicks while he playfully fumbles his instrument around in his arms during the rapid riffing of ‘Cockroach’. 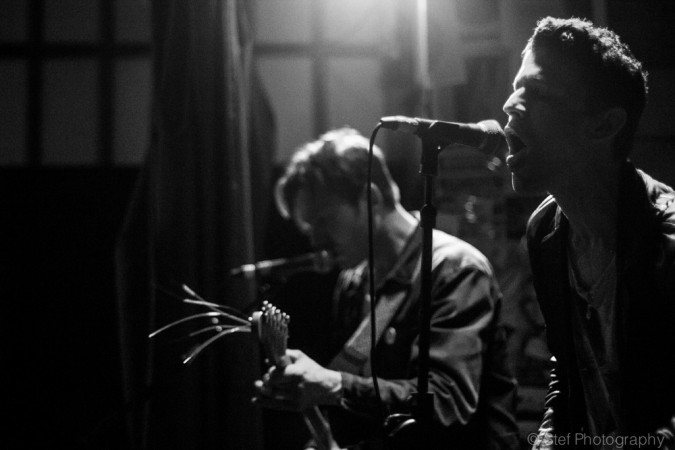 Welchez occasionally attempts a little repartee with the crowd between tracks, but intially it seems that the lack of response he receives is as much to do with the slightly indecipherable echo of his microphone and the persistent hum of feedback as anything to do with audience indifference. A failed attempt at interaction gives way to new song ‘Crybaby Demon’, a track which features the vocal refrain of “She gets so high” and which sees Rowell holding his guitar like a gun during some frenetic soloing.

Late in the show, Welchez more confrontationally addresses the crowd’s supposed quietness – “You’re all so quiet man, somebody say something”. Though the audience has been dutiful and polite in its applause at the end of each song, they do seem a little subdued. Maybe, it is due to the previously mentioned lack of intelligible noise emerging from the stage or, quite possibly, this is the nature of free gig; perhaps this is what happens when punters haven’t forked over their cash and, thus, are less predisposed in their commitment to enjoying a band.

Whatever the reasons, Welchez’s patience appears to be wearing thin when he declares that there are just two songs left and “then we’re fuckin’ out of here”. There’s just time for the fizzy, call-and-response clatter of new track ‘Do The Void’ and a final track where support act Hatcham Social are invited on for a joyous singalong as the crammed stage struggles to accommodate all seven musicians. Featuring a spirited five-way chorus vocal and Hatcham Social frontman Toby Kidd leaving the stage to boogie on down in the front row, the twelve song set ends in jubilant fashion.

This final song reveals a palpable camaraderie between buddies together on tour. Even if the same can’t quite be said about Crocodiles and their audience tonight, it really is through no fault of their own. It’s a typically solid and breakneck performance.