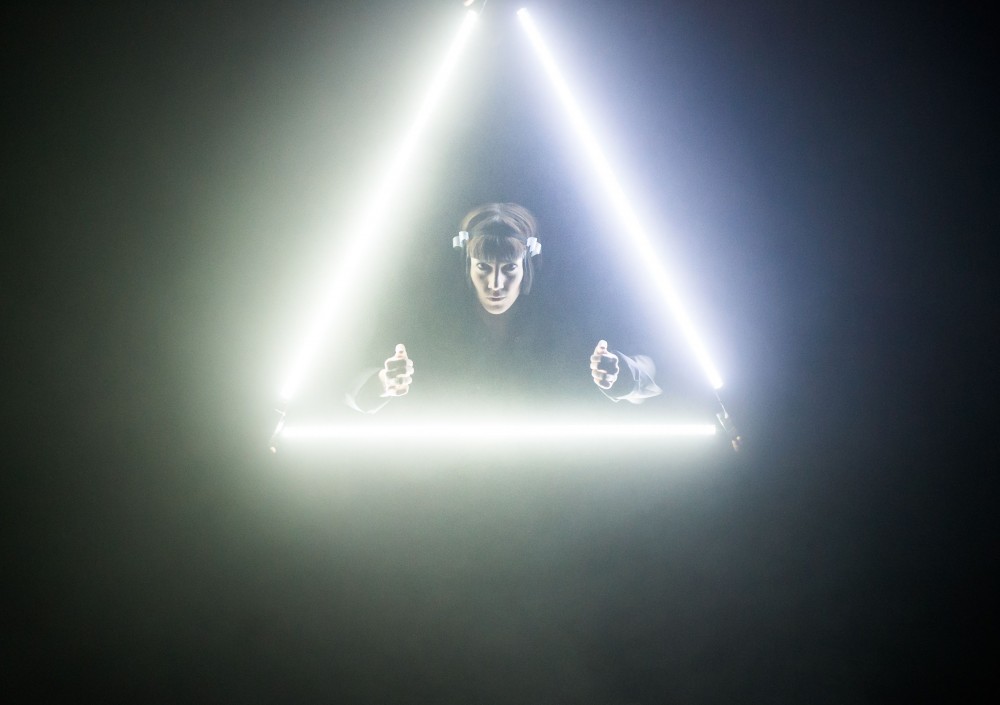 Theatre Ad Infinitum’s Light brings to Bristol Old Vic a tale of a dystopian Orwellian future, a state where a totalitarian regime monitors the thoughts of its citizens through implants. Entirely current themes then, in the wake of the NSA scandals, concerns over state surveillance and Enward Snowden’s whistleblowing flight.

Darkness, both literal and metaphorical, is a running theme in the show. Director George Mann started Light when having nightmarish visions of the surveillance state he found himself living in. The show, now realised, takes place in utter and complete darkness, and incredible blackness only pierced by the torches and strip lights carried and controlled by the performers. The audience is subject to both sensory deprivation and sensory overload at the same time.

The plot, set in the last part of this century, revolves around Alex, the son of the dictator and a hunter of so-called ‘terrorists’, those attempting to free people from the mind control of the state. In fact, the plot runs secondary to the style of the performance. This is mime, you see, but not as we know it. Not a word is uttered throughout as we are treated to horrifying, throbbing and shrieking setpieces.

This is truly a choreography of genius and immense patience as the performers’ movements match the soundtrack and switching around of the lights precisely. The incredible timing of light and sound as the mimes bounce around without missing a beat is quite a thing to behold. It is easy to forget that those on stage are also performing in the inky blackness, finding their correct positions through perfect rehearsal – it is no surprise that by the end they are glistening with sweat.

While the otherwise unrelenting pace may lag a little in the middle, and the performance as a whole leaves a terrified correspondent scared to return to a dark and empty flat, there really is very little to fault in Light. In fact, this is likely to be one of theatre’s finest moments of the year. The written word simply cannot do justice to some audio-visual experiences, and this is one such event.