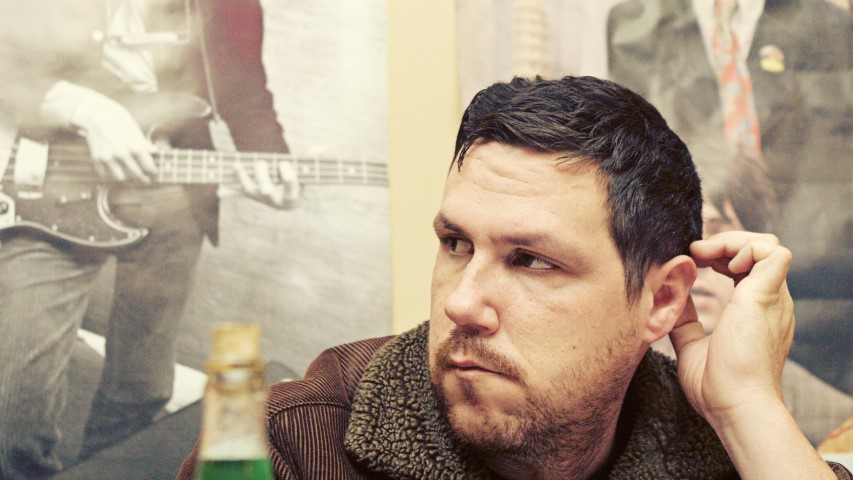 “Technically, this will be the first show in a while where it will sound any good.” Spending the first moments of tonight’s performance slowly tuning his acoustic guitar, Washington folk musician Damien Jurado makes reference to being bereft of his tuner for the previous three evenings; clad in a bright red beany which offsets his otherwise sober garb of black jeans and dark sweater, the singer-songwriter takes so long getting reacquainted with it that his constantly hitting strings and rotating tuning keys causes him to remark that this is all akin to some sort of “performance art.”

Jurado, finally tuned and ready to go, begins with ‘South’ and his clearly audible percussive foot-tapping and sweet whistling interlude provide near instant signs that tonight’s solo rendering of his recorded material will fit within the always excellent acoustics of St Georges like the proverbial glove. Shortly afterward, his lyrics even seem perfectly germane to the surroundings: “Heaven is full of people who belong” he sings during ‘Lincoln’ as religious iconography – still extant in the halls of the former church – looms high above Jurado’s scarlet headgear.

It doesn’t take long for one to notice the simplicity oft employed in Jurado’s songwriting. Without the piano, strings and caressing backing vocals of its recorded cousin, ‘The Last Great Washington State’ is the same repeating three chord pattern throughout while ‘Allocate’ is even more economical than that in its relentless two chord loop. In these moments, Jurado appears the quintessence of the notion that, in lieu of any kind of elaborate, or even moderately advanced chord structure, there’s much to be said for conjuring adroit vocal melodies and a warmly engaging singing voice.

The mid-set appearance of ‘Ohio’ – a lovely, finger-picked lament of a departing lover – and the infidelity infused drama of ‘Sheets’ make for a powerful one-two punch which perhaps best encapsulates Jurado’s ability as a songwriter. These songs transform the gig from a warmly but reservedly received show to something more emphatic; the polite applause that hitherto followed each track is now accentuated with whoops and cheers.

The midway mark is also the moment where Jurado himself – up to this point a humble figure of low mumbles of gratitude – emerges from his shell. Eliciting an amusingly indifferent response with his mention of appearing in Birmingham (“Birming-Ham”) the night before, he jokes about his mischievous intention to “start shit between cities”. There’s an extended introduction to a new song inspired by an anxiety alleviating 12 minute “mantra” he heard on AM radio in 2001 and his later cajoling of the audience to ask him questions leads to his declaring a love for Marks & Spencer’s food, his being a cat person and Jurado’s insistence on the superiority of American cheese.

A second new song ‘Day After Day’ – presumably to be included on the upcoming album Jurado reveals to be entitled What’s New, Tomboy – is further evidence of his knack with an appealingly easy chord progression and an attractive melody. After checking the time with a member of the audience (“Twenty to eleven? I better wrap this up!”) and offering a touchingly genuine thank you to the venue’s staff, Jurado closes with the pretty ‘A.M AM’. He riffs on the lyric “I’m not leaving you” by inserting a jokey “Yes I am because it’s my last song” in bringing the set to a close. Within the walls of St George’s and reunited with his tuner, Damien Jurado may never sound better.