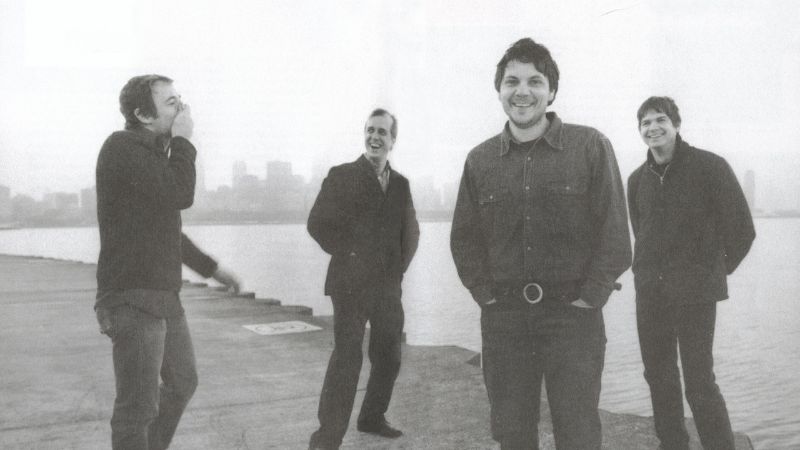 After the gorgeous, coruscating pop of 1999’s “Summerteeth” sold a modest 200,000 records despite near unanimous acclaim from critics, Chicago band Wilco set out in the latter months of 2000 to make their most ambitious record to date. In ‘I Am Trying To Break Your Heart,’ director Sam Jones follows the group as they convene at their hometown “loft” to create what Reprise Records were hoping would be something of a Magnum Opus to truly establish the band as a viable commercial force. “This is the record that needs to take the band to another level; if that didn’t happen it would be a tragic, missed opportunity and it would damage the band” are the words offered by Wilco manager Tony Margherita to emphasise the album’s significance. As it transpired, “Yankee Hotel Foxtrot,” achieving both commercial and critical success, did propel the band’s career forward but the intrigue surrounding the album seems to be as much for the tumultuous effects of its creation as for its considerable sonic merits. A similar appraisal could also be made in regards to ‘I Am Trying To Break Your Heart’ as the plot twists therein transfigure Jones’ film from its potentially existing as a relatively pedestrian, for-fans-only document into a compelling overview of music industry politics and the disparate motivations of art and business.

Having made his name as an accomplished celebrity photographer for the likes of Vanity Fair and Rolling Stone, Jones’ inaugural foray into filmmaking sees the photographer sensibility prevail in that his documentary, shot fully in monochrome, is passively shaped by a fly-on-the-wall approach where Jones merely exists as an observer of what occurs around him. Where he does give shape to his film is in the sanguine presentation of its harmonious opening acts that serve as a somewhat predictable foreshadowing of the turbulence to follow; the drawing of a face by multi-instrumentalist Jay Bennett on the ample gut of singer-songwriter Jeff Tweedy is a manifestation of frivolity largely at odds with the friction that ensues, and a contented Bennett later speaks of a growing collaboration with Tweedy increasing his role as a co-writer of Wilco’s songs.  We also hear Bennett’s positive views on a trustful record company that has given them $85,000 to go ahead and make an album in their own recording space while the band’s five members are all described as adroitly creative musicians, capable of facilitating Tweedy’s idea of “constant process” and taking control of the endless spiral of musical possibilities that, at any moment, can bring shape to the songs. So far, so good.

What follows is an increasingly noticeable lack of convergence between artistic and business sensibilities and an internecine disunity between the band’s two creative forces. The scene featuring a discernibly awkward Tweedy squirming his way through backstage questions from sycophantic retailers and radio personnel is a near perfect illustration of the chasm that exists between those who create the musical product and those who sell it; already visibly disinterested with banal enquiries regarding the new album, a diffident Tweedy’s otiose description of the record containing lots of “holes” induces a lame, punning mention of Courtney Love and a final straw that sees the singer hastily exit from the room. It is in the relations between Tweedy and his fellow songwriter, however, that things appear most fractious; his argument with Bennett regarding the intro to ‘Heavy Metal Drummer,’ and the apparent crossed-wires as to the actualities of their disagreement, are clear signs of a growing disintegration. Later in the film we see these tensions culminate in Bennett’s departure from the band following “Yankee Hotel Foxtrot’s” completion and the reactions we hear from his erstwhile bandmates are of unanimous satisfaction with Tweedy’s decision to dismiss him. The depictions of Bennett as a somewhat needy musician and increasingly undesirable bandmate may be accurate but his claims that Tweedy had begun to feel threatened by his growing influence in the band also possess the ring of plausibility.

After the late summoning of Jim O’Rourke who impresses the band with his final mix of the album, “Yankee Hotel Foxtrot” is finally complete and sent to Reprise Records. Wilco are made to wait, and wait, and it finally transpires that executives at Reprise are dissatisfied with what they hear. Faced with an album bereft of an obvious single and doubtful as to its ability to perform commercially, the record company’s demands for alterations to be made are disregarded by the band and thus, an impasse begins where both sides remain obstinate in their respective positions. The deadlock results in Wilco being released from their contract with the somewhat conciliatory gesture that they are free to take the finished record elsewhere. The decision is the consequence of a business motivated mind-set as identified by senior editor of Rolling Stone magazine David Fricke: “If I was an executive at a record company and I listened to “Yankee Hotel Foxtrot,” I probably wouldn’t get it because it doesn’t tell me exactly who it’s for, it doesn’t tell me exactly what it’s about and it doesn’t tell me exactly how much it’s going to sell.”

Despite the percipience of Fricke’s observations, we learn a lesson in the value of friends in high places with the departure of Reprise President Howie Klein on the day that the album was submitted; a fan of the band since their former incarnation as Uncle Tupelo, Klein informs us that there was “no chance that Wilco would’ve ever been dropped while I was president of Reprise Records.” With between 25 and 30 record companies eagerly orbiting around Wilco and keen to pay good money to have them aboard, the band sign a deal with Nonesuch Records and revealed is the starkest of ironies: Reprise and Nonesuch are subsidiaries of the same parent company and, thus, Time Warner pays for “Yankee Hotel Foxtrot” twice as a result.

Aside from the band and record company politics we see in Jones’ film, there are several gems of intrigue that, for devout fans of Wilco, will extend the enjoyment levels far beyond that of the casual viewer; of note are a rocking rehearsal of ‘I’m Always in Love’ and a folksy early jam of ‘Poor Places’ which provides an interesting look into the process behind the sonic deconstructions employed during the album’s creation. The ever engaging Fricke also makes some insightful comments regarding a modern society of impatience and convenience completely non-conducive to sitting down and investing the time to absorb great art such as “Yankee Hotel Foxtrot.” The central thrust of Jones’ documentary, however, is undoubtedly the achievement of what Margherita describes as the “coop of all time”; able to manufacture a situation whereby one of the world’s largest entertainment corporations released them from a contract with a record that had already been paid for, Wilco subsequently sold it back to them for three times the price. It is an irony that highlights an asinine bureaucracy within the music business and one that saves “I Am Trying To Break Your Heart” from a life of potential obscurity.