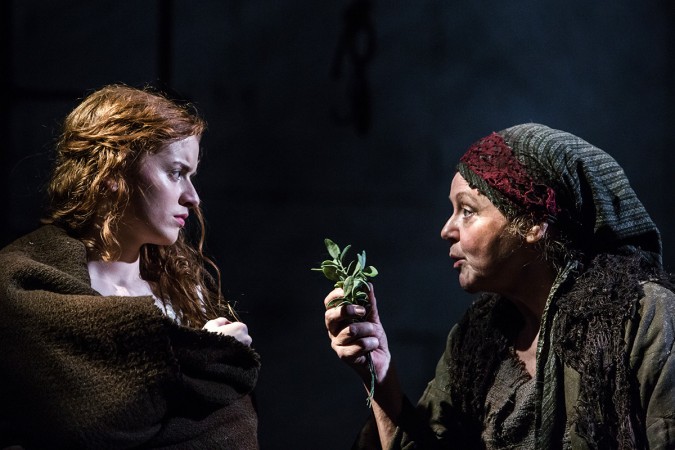 Following a 2015 BAFTA award for her co-writing of Polish drama film Ida, Rebecca Lenkiewicz’s new play is based on the true story of its eponymous character and the accusations of witchcraft that ravaged the Hertfordshire village of Walkern in the early 18th century.

At a time when England had just a few remaining years of accused witches being lawfully sent to the gallows, Walkern in 1712 is introduced as a melting pot of prejudice, fear and disharmony. To some, the recent hanging of suspected witch Eleanor Thorn offers hope that a curse has been lifted over the village while others, such as the sanctimonious Reverend Crane, view the execution as just the beginning. Saner voices, including that of Bishop Hutchinson, see through the conjecture and view Walkern’s history of witch hunting as a brutal cleansing of those who happen to be poor, elderly or merely different.

These polar opinions are best represented by the combative scenes between Hutchinson and Crane. The bishop doesn’t believe in witches and insists on concrete evidence while Crane (the convincingly pious Tim Delap) is a fervent believer in his version of God and convinced that a pervading wickedness needs exorcising from Walkern. Crane’s fierce religiosity and the tragic loss of a young child lead to accusations against Jane Wenham, an eccentric herbalist who was first accused of witchcraft a couple of decades prior.

As with Arthur Miller’s ‘The Crucible’ which has enjoyed a month long stint at Bristol Old Vic this autumn, the play uses the subject of witch trials as a fulcrum on which to form contemporary allegories. As with Miller’s play, the themes of violence in the name of religion, misogyny, fear of the outsider and the danger of mob rumour are all timeless in their continued relevance; however, what distinguishes Lenkiewicz’s play is a focus on sex, human frailty and the motivations behind our actions. 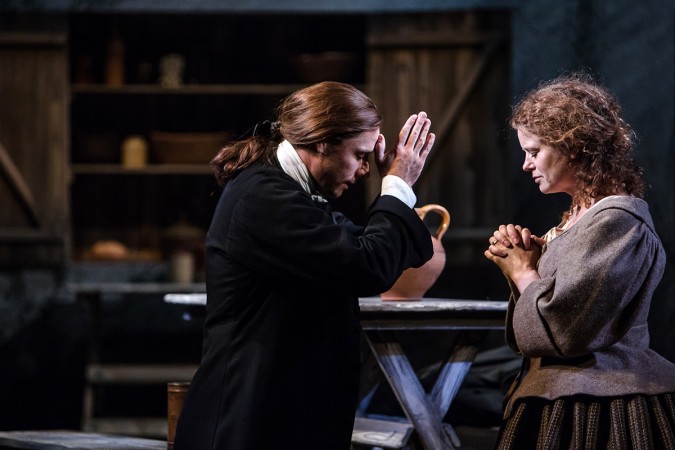 Having lost five children to miscarriage, village drunk Fergal McGuire’s infidelities and blame of witchery can be explained by a deep unhappiness while the supposed “sins” of his adulteress Widow Higgins are tinged with a certain benign morality. Meanwhile, young Anne Thorn becomes the chief instigator of accusations against Wenham in the context of heartbreak about her mother’s hanging and a pivotal confrontation regarding her sexuality.

The simple and elegantly bleak set effectively captures the growing sense of unease in Walkern; a noose hangs astride a double sided ladder serving both as a makeshift lantern holder and an ever-present reminder of what’s at stake, an illuminated red square centre stage ably evokes a camp fire and simple tables and chairs are subtly rearranged to portray the bishop’s residence and the tavern run by Higgins. The set changes are occasionally bridged with singing from the excellent Cat Simmons who plays Hutchinson’s lusted after Caribbean servant Kemi Martha.

With the play being so thematically similar, it’s difficult to avoid making comparisons to ‘The Crucible’. It never really comes close to capturing the formidable intensity and high-stakes drama that are the cornerstones of any decent adaption of Miller’s play, and its saucy obsession with carnality perhaps detracts from the tension surrounding Wenham’s fate. However, the lighter approach within the script is what defines the play as something separate from ‘The Crucible’ and it does deliver a few moments of laughter: Crane’s opportunism in pleading for Higgins to take his pain away through sex is genuinely amusing as are speculations that Wenham chooses to “conjoin” with her chicken James.

‘Jane Wenham – The Witch of Walkern’ is showing at the Tobacco Factory until 7th November.